Just sorted and took some pics to update my Eldar inventory for the new Codex...

Wow...I got a lot more painting to do than I had realized...

Posted by Ranger Rob at 8:08 AM No comments: 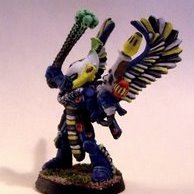 So the interwebs are alive with rumors of the Eldar being the June 2013 release by GW.  Lots of interesting rumors out there for what the new Codex will bring.

Autarch taking paths that unlock aspect warriors to be used as troops...kinda neat.  Though my custom Autarch may be a little tougher to build as he has Hawk Wings, Scorpion Mandibles, Dragon Fusion gun...and now the Web of Skulls is coming back for the Reapers.

Still, the rumors were enough to get me picking up my eldar again.  I've assembled and magnetized two Wraithlords that were in pieces.  Making one look like a former Striking Scorpion by giving him Mandibles on his head (Flamers).

That's all for now...more to come with the codex release.
Posted by Ranger Rob at 11:31 AM No comments: 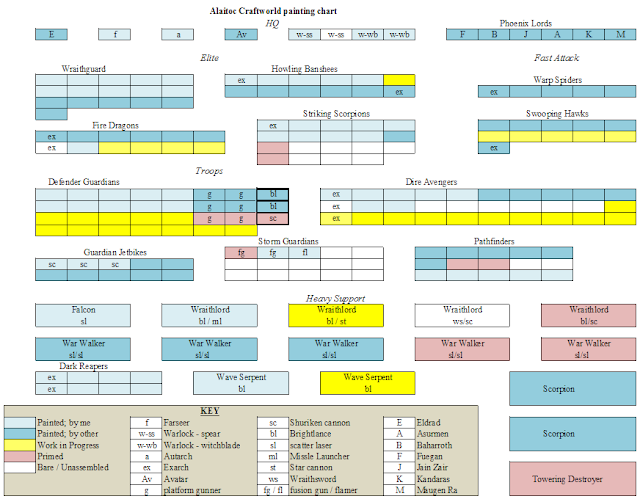 You can click on the chart above to get a full screen look.

I did this painting chart up to get a better grasp on...


When I first started in 40k, my original army was Dark Angels...way back in the Rogue trader / 2nd Edition days. Then I made a couple of trades with some folks I knew.

First, a friend of mine was a BIG comic book collector...I mean like room fulls of the stuff stacked in boxes. He had a poorly painted Eldar force, and I had a box full of Comics (West Coast Avengers, Iron Man, Punisher, etc...) I gave him my comics, he gave me the Eldar.

Then, there was a Golden Deamon winner in my area that was looking for his 1st 40k army. I gave him my Dark Angels, he painted my new Eldar. I didn't really have that much at the time. 10 Terminators, Captain, 40+ Tactical marines, Predator, Dreadnought, Attack Bike, Librarian, Rhino, Land Speeder, Chaplain, Chaplain on jetbike, Scout squad from Tyranid attack. For that he painted up all the Eldar I had at the time. He did an awesome job on the characters (Eldrad, Avatar, all the Phoenix lords, Warwalker). He did an very nice job on the Aspect warriors too. Since then I've picked up pieces and parts to add to the army, some painted some not. You can see on the key that the darker blue shaded stuff is not my work. The lighter shaded stuff is my work, and i still have quite a bit to go.
Posted by Ranger Rob at 3:56 PM No comments:

Next to be painted